Letters of no confidence in Liz Truss 'already being put in', says Tory MP

Letters of no confidence in Liz Truss 'already being put in', says Tory MP

The expansion of capitalism led to a deterioration in human welfare, according to new study

The expansion of capitalism led to a deterioration in human welfare, according to new study

If you’re not aware of rampant sinophobia in US then really don’t know what to say. Here’s a concrete example of US doing witch hunts.

US has been demonizing China for close to a decade when US began to see China as a rival. The public was driven into a frenzy through a relentless propaganda campaign. You can see how in a short period views of China went from being overwhelmingly positive to overwhelmingly negative. Crime against Asians in US has spiked as a result. US government manipulates domestic public opinion masterfully.

Cost of living is far lower in China than in Europe, especially now that there is a huge energy crisis unfolding in Europe.

How did the rise of capitalism affect human welfare? Did it make poverty better or worse? Where did progress come from?

How did the rise of capitalism affect human welfare? Did it make poverty better or worse? Where did progress come from?

Firefox to the rescue

Firefox to the rescue

The Return of Fascism in Italy

The Return of Fascism in Italy

Democratic Centralism allows groups to make decisions collectively - giving everyone a voice while maintaining harmony and unity in thought and action.

Democratic Centralism allows groups to make decisions collectively - giving everyone a voice while maintaining harmony and unity in thought and action.

A result of having no political education 👇

A result of having no political education 👇

Former CIA station Chief: "I don’t think that I’ve ever seen—in my entire life—such a dominant American media blitz as what we’re seeing regarding Ukraine today."

Former CIA station Chief: "I don’t think that I’ve ever seen—in my entire life—such a dominant American media blitz as what we’re seeing regarding Ukraine today."

Water in asteroid dust offers clues to life on Earth

Water in asteroid dust offers clues to life on Earth

whatever helps you sleep at night I suppose

Yeah, we’re done here because Russia hasn’t massacred over 6 million people in a war on terror last I checked. I’ll gladly accept your ignorance and lack of skill to detect propaganda. 😂

All this from a guy who recognizes that the crimes NATO is responsible for eclipse anything Russia has done. Another basic fact you refuse to accept.

If that’s the definition of a coup, then US did a coup on the whole of EU a long, long time ago. All EU politicians answer to US masters and do their bidding over the interests of their own people.

And, no only an utter simpleton would frame things in terms of two sides where one is bad and the other is good. This is a childish perspective that anybody past the age of 8 grows out of. Real world is complex and messy with all countries having their own interests.

Meanwhile, Euromaidan was a coup by every definition of a coup. It wasn’t a secret it’s a well documented thing that again, plenty of experts I’ve linked repeatedly discuss at length. The fact that you continue trying to pretend it wasn’t a coup shows how desperate you are to ignore reality and live in a black and white world that your simple mind can comprehend.

The coup doesn’t happen overnight you understand that right? Coups take time to build, to install NGOs, groom extremists, take over politics, and so on. If you don’t even understand this, what else is there to tell you.

Well, this is one big lie. Russia certainly was not fine with Ukraine doing its own thing. From Wikipedia:

Euromaidan are western sponsored color revolution my dude. This is precisely the event I’m referencing here. Hilarious how you expose yourself here trying to claim that I’m lying.

Western experts also say it’s a mistake or a lie to call the past eight years civil war. Pure disinformation. Who is saying otherwise?

I linked world renowned experts like Mearsheimer and Chomsky who call this a civil war. Which experts claim otherwise exactly?

You also continue to claim Ukraine is a victim of a violent coup.

No, that’s not me claiming it, it’s people like Mearsheimer saying this.

Ukrainians wanted closer ties with EU, not Russia, but their government failed them

So, what would you say Russia is trying to do now? Invading regions, removing citizens, starting false elections and voting…

And they even said Ukraine shouldn’t exist and the goverment must be replaced. Smells like a violent coup, but that seems to be ok for you?

Russia has been perfectly fine with Ukraine doing its own thing until the 2014 coup, now that it’s been turned into a NATO puppet state they have a problem with it. Wonder why…

I don’t care on iota what a lying ideologue thinks about my face to be honest.

Well that’s the danger with gambling on provocations, you can always miscalculate catastrophically as US has done this time. However, that doesn’t change the fact that Russia tried to resolve this problem diplomatically for whole eight years.

Civil war was happening for the past eight years while you were evidently sleeping. You can’t even argue that you’re uninformed about this conflict, because I’ve repeatedly linked for you what western experts have been saying about this for decades. You are just a straight up liar.

Says the guy who consistently ignores basic facts and tried to argue that NATO is the lesser evil with a straight face. A guy who failed to pass kindergarten is the one who still doesn’t realize he’s gonna be freezing this winter.

The reality is that Ukraine has been in a civil war since the government there was overthrown by the west in 2014. Ukraine is not a homogeneous entity where all the people are united in one purpose. In fact, most of the fighting that’s been happening up to now was carried out by LPR and DPR militias with logistics, air, and artillery support by Russia.

Furthermore, it’s worth noting that Russia used exact same model that NATO used in Yugoslavia to justify the war. Russia recognized independent status of LPR and DPR the same way NATO recognized independence of Croatia and Bosnia. Then they were invited by these newly recognized states to assist in the war. It’s the same playbook, and NATO set the precedent here.

Speaking of Armenia, I recommend reading this RAND paper that suggests using a conflict between Armenia and Azerbaijan to extend Russia.

this is a kindergarten level of argument

If you bother to RTFA, then you’ll see the report actually says that Russia is reluctant to get into a conflict with the west.

What’s ridiculous is your lack of understanding of Ukraine. I highly recommend watching this lecture from 2015 to get a bit of background on the subject. Let’s take a look at a few slides from that presentation. First, here’s the demographic breakdown of Ukraine: 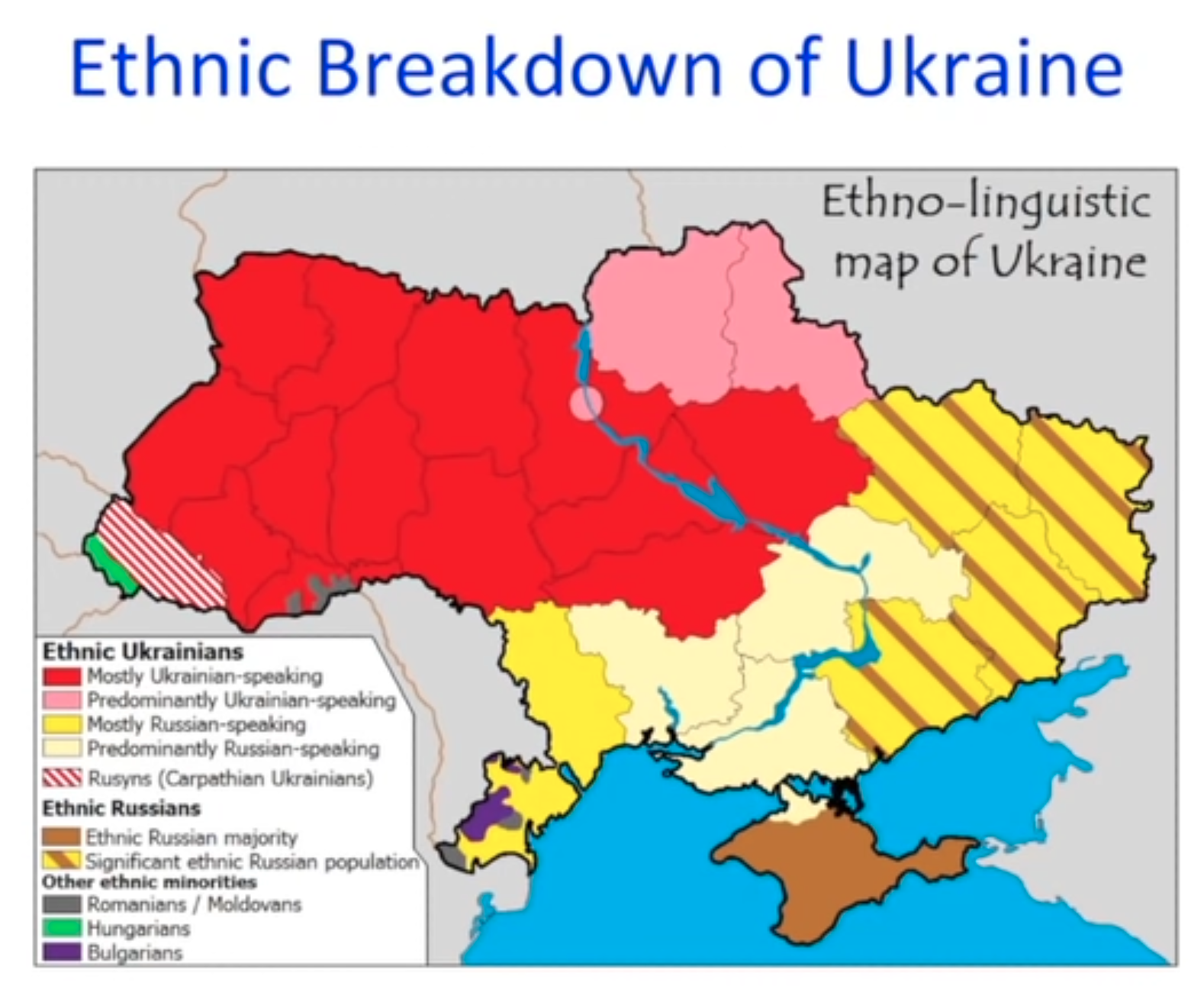 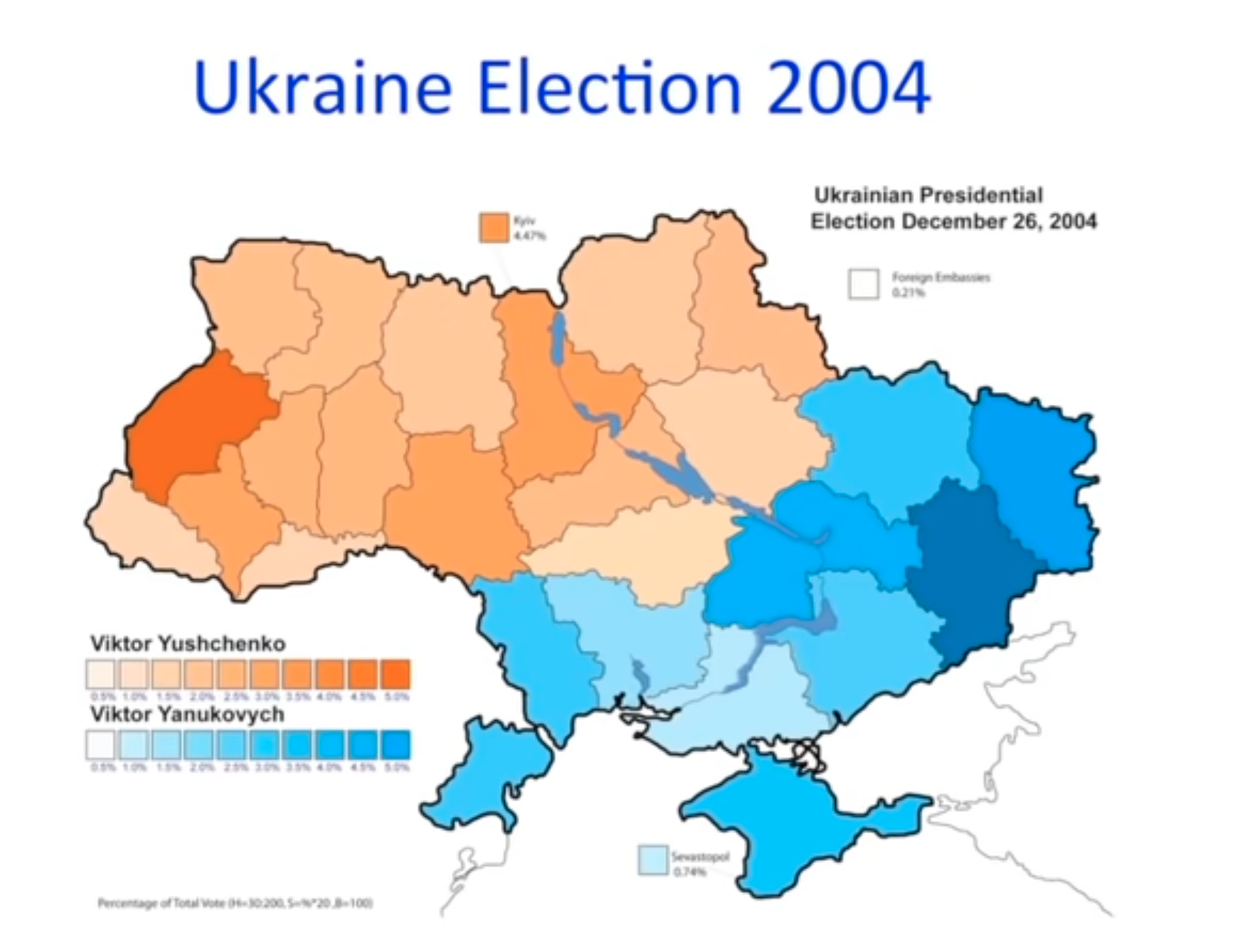 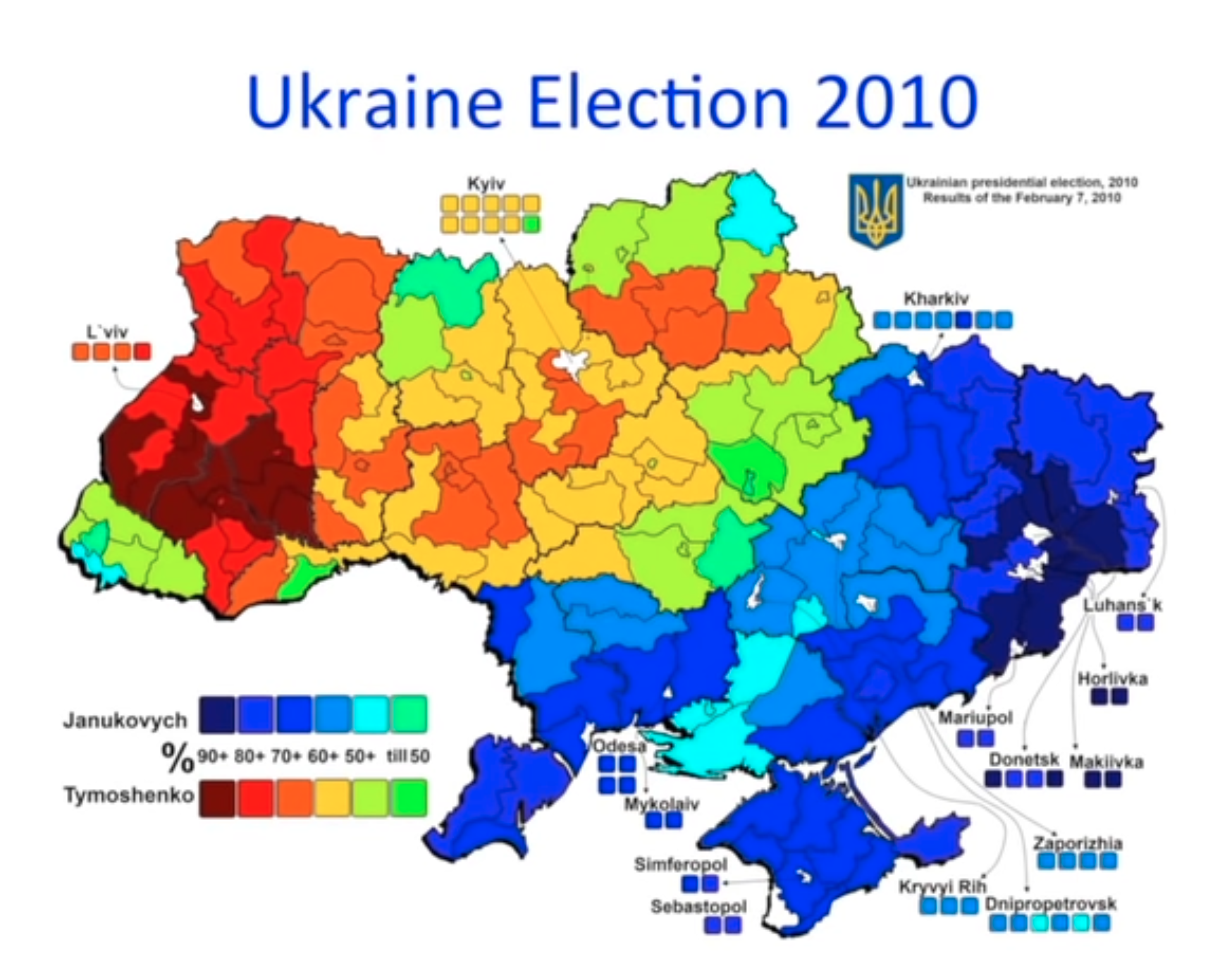 As you can clearly see from the voting patterns in both elections, the country is divided exactly across the current line of conflict. Furthermore, a survey conducted in 2015 further shows that there is a sharp division between people of eastern and western Ukraine on which economic bloc they would rather belong to: 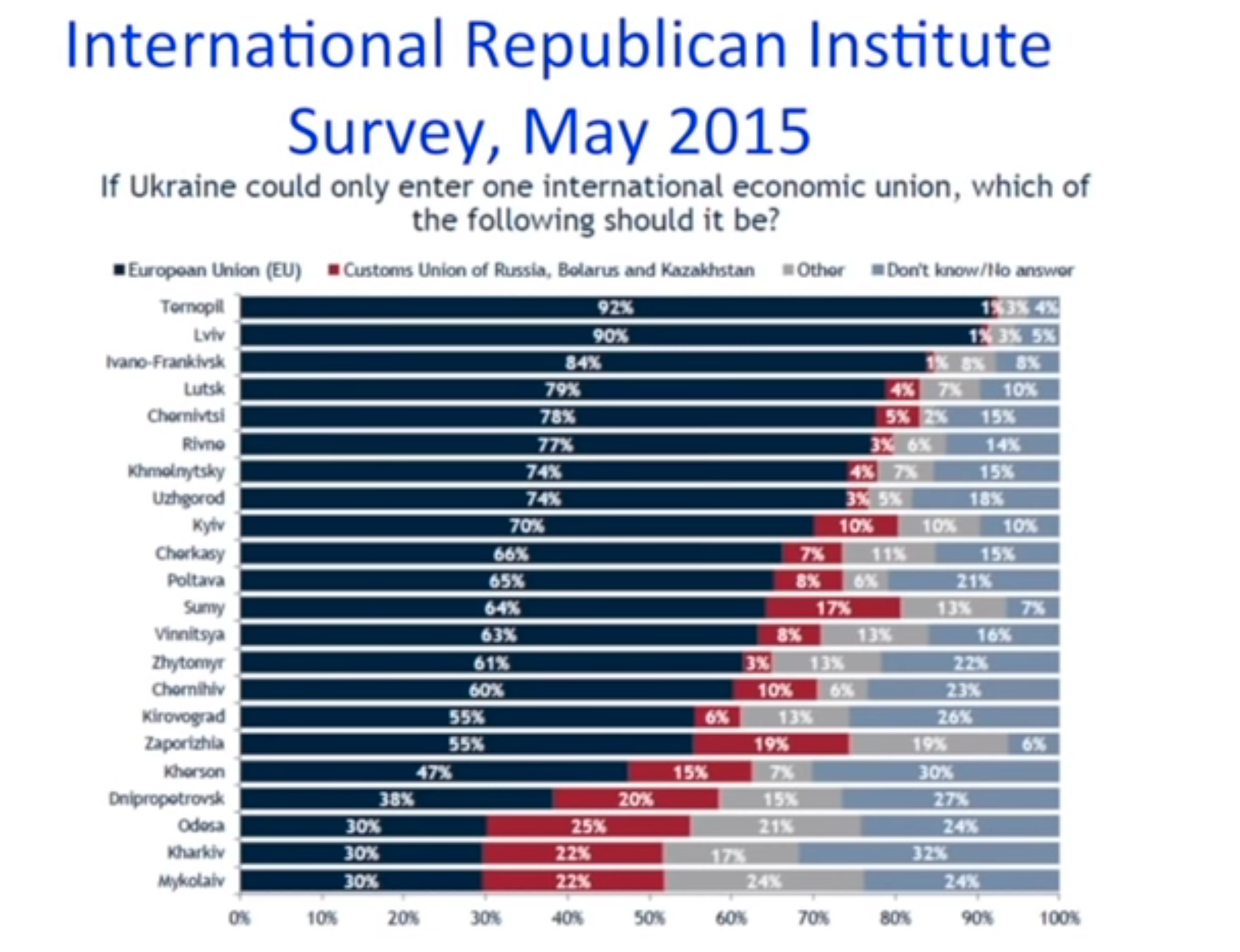 You seem to think that Ukraine is some homogeneous blob as opposed to a large country with a complex ethnic situation. I’m also not sure where you got the notion that I think Russia is doing something great. It also hasn’t been a communist country for over 30 years now. That’s just pure nonsense. What I think is that Russia sees NATO expansion to its border is a threat, and it’s now reacting to this threat. Countless experts in the west warned that this would happen, and now it has happened.

Here’s what Chomsky has to say on the issue recently:

Even Gorbachev warned about this. All these experts were marginalized, silenced, and ignored. Yet, now people are trying to rewrite history and pretend that Russia attacked Ukraine out of the blue and completely unprovoked.

You have no understanding of the actual situation in Ukraine, and you don’t want to accept the complex reality here because “Putin bad”.

You could lead by example.

Yeah, I find that as well. Usually I’ll do some scripting to automate something or play around with doing visualizaions. Here’s a little example of doing some stuff with graphics.

Babashka also worth a mention, it’s a lightweight runtime for Clojure that has low memory overhead and fast startup https://babashka.org/

You can do dev against a repl with it as well, you just run bb --nrepl-server and connect the editor to the port it starts on. Might be the fastest way to play with the language. :)

Thought you were gonna stop spewing nonsense at me?

It is a civil war, and you are the one spreading misinformation here. This is a well documented fact that has volumes of references. I love how you take issue with Russia being part of the conflict while conveniently ignoring the fact that the west is also part of the same conflict.

“Overthrown in a violet coup” is also a broken record.

Because that’s a documented fact that is acknowledged by plenty western experts. The color revolution was sponsored by the west and it constitutes a coup. Don’t know what those quotes are doing there.

It’s strange that these same broken records must be spammed to all threads. Shouting bullshit louder doesn’t make it a fact.